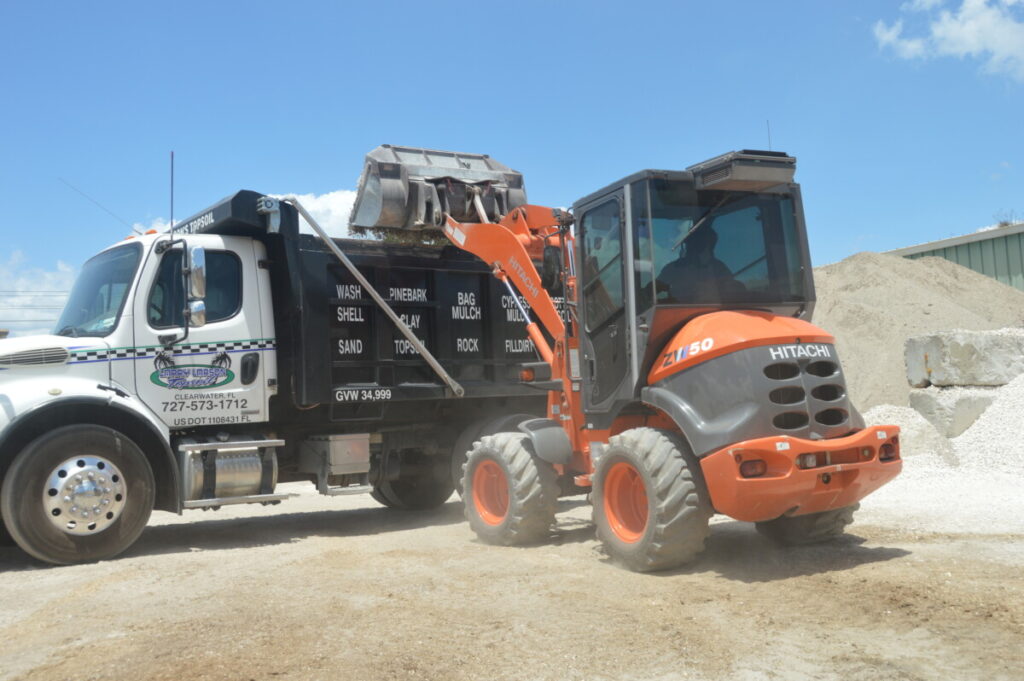 In Central Florida landscapers stay busy year-round. To feed their never-ending appetite for materials, Larson Topsoil sells and delivers everything they need in the way of materials mulch, rock, gravel, sand topsoil, potting soil, and shell.

With a small crew including himself, his son and wife and four others, Larry Larson, the company president, dispenses $3-million worth of materials every year using a fleet of small wheel loaders and four Class 8 delivery trucks.

Larson sells to everybody, from homeowners to big outfits, and that means a lot of activity. On any given day they’ll be loading everything from pickup trucks to tractor-trailer rigs. Space is tight in his yard, and the small wheel loaders stay busy.

Given this environment, Larson’s latest additions to his fleet, two Hitachi ZW50 loaders, make a lot of sense.

The small wheel loaders’ size (just 5-foot 5-inches wide over the tires) and good visibility work well on a crowded yard. At full reach the bucket pin height (14.5 feet) allows them to load even the tallest haul trucks. And with the company’s offices just yards away from the stockpiles, it doesn’t hurt that the ZW50’s 44-horsepower, Tier 4 Final engines make them the quietest machines on the property.

“In all honesty, I really love the Hitachis. They are sweet machines and they have lots of power.”

“In all honesty, I really love the Hitachis,” Larson says. “They are sweet machines and they have lots of power.”

Compared to a skid steer, the small wheel loaders’ better visibility is an important factor for Larson. “I’ve known customers in the landscaping business who were hurt on skid steers, one customer got killed by one,” he says.  “I wouldn’t have a skid steer in my operation.”

And the benefits of climate control make for happy operators in Central Florida. “When I was ordering the Hitachis, I asked my nephew who works for me if he wanted an open or closed cab,” says Larson. “He said it didn’t matter, but once he got in the closed cab with the AC, he wanted to hug me.” 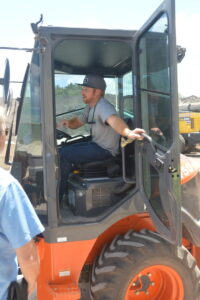 Larson’s enthusiasm seems to have spread to other family members. “My brother has a business similar to mine. He bought a Hitachi ZW80, and my brother-in-law bought two ZW80s. Those are open cabs but they bought them pretty much on word of mouth because I liked the ZW50s so much,” Larson says.

And Larson may not be the easiest customer to sell equipment to. “It depends on who shows up and what kind of mood I’m in,” Larson says. Nevertheless, he’s been satisfied in his relationship with his dealer Great South Equipment and the small wheel loaders.

“We had one issue with the loader but they came right out and fixed it. Otherwise, we haven’t had any problems. One loader has about 2,000 hours on it and another is close to 1,100 hours. They’ve been great machines.”

Like many people who work with heavy equipment, Larson and his son are car enthusiasts. Larry owns a baby-blue ’57 Chevy pickup truck that he had restored and upgraded. His current project is a ’55 Chevrolet Bel Aire, which is undergoing a complete frame-off restoration.

Larson was racing cars when he was 17 and helped his son Justin get started in the sport with the intention of breaking into the ranks of NASCAR.  After a few years, Larson realized that NASCAR was going to cost more money than he was comfortable with, so for the time being they’ve backed off on those goals.

“Justin is a marketable kid, and he has talent,” says Larson. “But I didn’t have the $2 million dollars it takes to get my kid a ride with NASCAR. I wasn’t going to mortgage the farm to do that. So I still have two cars but I sold the hauler. And I don’t owe anybody anything.”

Larson’s aversion to debt extends, not just to racing, but to his entire business philosophy. That’s one of the reasons his company weathered the 2008-09 recession with little damage.

“I learned working for my dad, who also had a landscape materials business, to always put some money away for a rainy day,” says Larson. “So, we were able to survive the recession. We slowed down some, but we were still moving right along. We’ve been blessed to keep going. Debt is a real killer.”

And it doesn’t hurt to have a wife who worked in a bank before joining the business. “All she does is save. She never wants to spend,” Larson says, although he means it as a compliment. When asked what’s the number one reason he’s been successful in business, Larson will tell you, “A good wife.”

Larson has operated out of the same location since starting his business 38 years ago. With access to Clearwater, Palm Harbor and Pinellas Park, landscapers in three counties know it’s easy to get to Larson Topsoil.

“Everything came to us,” says Larson. “Even people further away will drive down to us because we’ve got such a good reputation. And believe it or not, I still sell to customers we had when we started.” 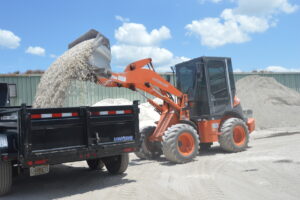 Having mostly family and friends of family in the business helps keep Larson Topsoil stable and successful as well.

Finding outside help—people who can drive a truck and run a machine, who will show up on time and work hard—is a struggle for Larson like any other business owner. “I’ve hired some people from the outside but it usually doesn’t work out,” Larson says.

“But Harold in the office, he’s been a family friend for 45 years,” Larson says. “My sister has worked for me from the get-go. My wife left her job to work for us four years into our marriage. Justin has worked for me since his teens and now he’s the general manager. And Aaron Thompson, my nephew, is the yard manager.”

A tight knit crew of family and friends helped bring success to the company. But it also requires flexibility. If you work at Larson Topsoil you do whatever needs to be done, whenever it needs doing, even if you’re the boss.

Some days Larson rarely leaves the office. Somedays he rarely sees it. “Like today, I jumped in a truck and took an order of shell to Oldsmar,” says Larson. “I came back, jumped into another truck, took a load of filler dirt to the northeast section, then came back and jumped into the small wheel loader to pile up a bunch of dirt. Every day is different.”

A COMPACT EXCAVATOR TO FIT EVERY JOB SITE

How do you know which excavator is right for you? Choosing the right excavator requires careful consideration. You want the power to get the job done efficiently while achieving the lowest operating cost. The right solution depends on the types of projects you typically handle. 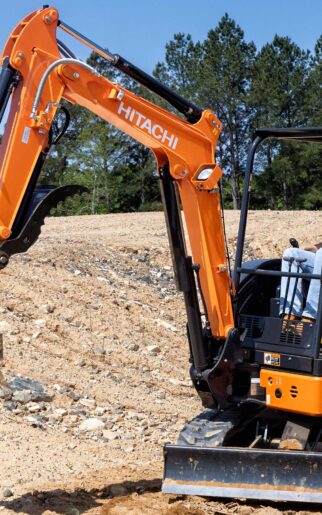 ENERGY MANAGEMENT IS FUNDAMENTAL TO SUSTAINABLE MINE SITES

Mine sites are getting serious about decarbonization, and more are exploring electrification as a possible solution to reduce greenhouse gas emissions. Reducing carbon emissions while maintaining productivity is a formidable challenge as mining remains an energy-intensive activity. 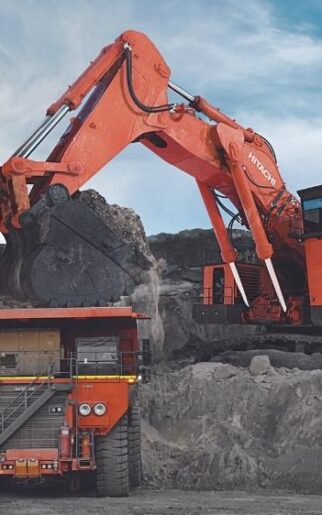 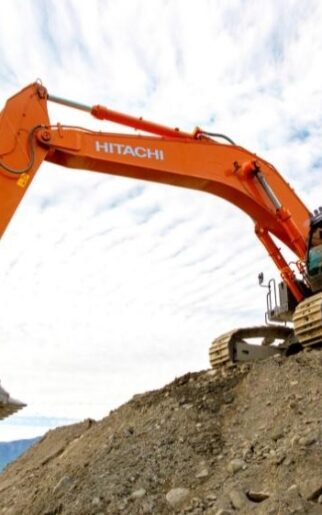 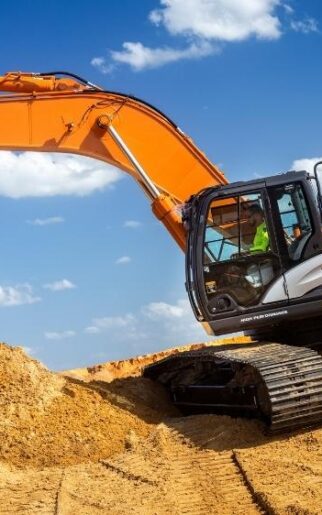