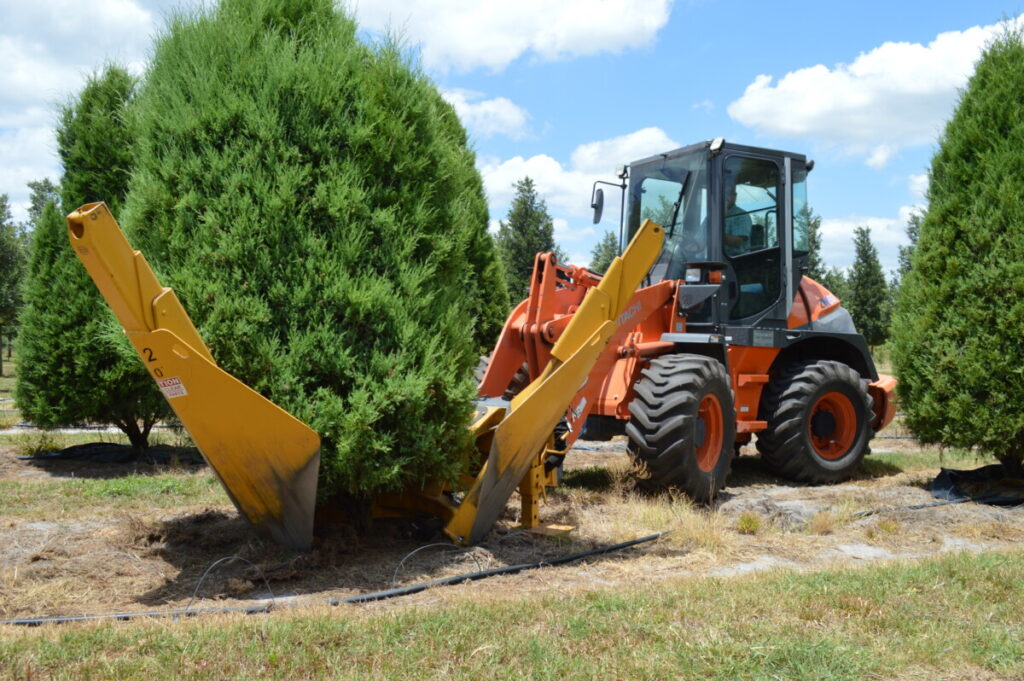 Using everything from greenhouses and garden shears to a pair of six-ton loaders and massive tree spades, this company in central Florida grows landscaping trees big and small.

As a helper in his father’s vegetable farm, Stoney Maddox has had his hands in the soil growing plants since as far back as he can remember.

In 1999 he acquired nine acres and started a tree farm business in Bevilles Corner, Florida.

From those humble beginnings, he’s grown his business to encompass more than 100 acres.

Taylor-Cade Trees (named after his children) nurtures trees from the seeds in a greenhouse up to mature specimens planted in the ground and harvested after five years. Selling to nurseries and frontline landscapers, the company offers everything from containerized trees and shrubs to ground-planted trees upward of 10 to 20 feet tall. Live oaks are his most popular product, but he sells plenty of magnolias and evergreens as well.

With large greenhouses and planted trees stretching to the horizon, Maddox is a busy man. “We have 34 employees and planting goes on year-round,” he says. As a wholesale distributor the company sells north of 300,000 trees a year. Taylor-Cade Trees is family owned and operated. Maddox’s wife, Lori, does the company payroll while he mostly takes care of the work in the fields and greenhouses. 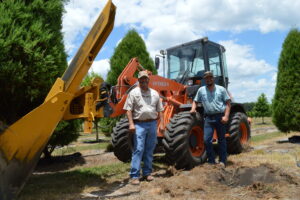 Maddox’s employees plant seedlings and containers six days a week, sometimes seven. Planting and harvesting the more mature trees in the ground usually takes place in the winter when there is less stress on the trees. But there’s no real off season.

While in the containers the trees grow 6 to 10 feet tall. To keep these container-bound trees from blowing over in a storm, they’re lashed to a long line of cable. But when hurricanes threaten, it’s all hands-on deck as crews scramble to untie the cables and lay these hundreds of valuable and vulnerable trees on the ground.

Maddox says he occasionally forces himself to take a few days off to go fishing or hunting, but even then, in the back of his mind, he says he’s always thinking about his trees.

In the Taylor-Cade greenhouses, thousands of seeds growing in trays must be maintained at precise temperatures and moisture levels around the clock until they’re ready to transfer into containers. Depending on the species, the temperature, moisture, and soil medium in which they’re growing vary by subtle amounts. There’s a lot of science to it, but Maddox is beyond science. After all these years, he’s turned it into an art.

From starting the seedlings to pruning, there is a huge amount of hand work that goes into a tree farm like Taylor-Cade. But with more than 100 acres in play they need machinery as well. The company’s fleet consists of an aerial lift, trucks, sprayers and a dozen or so utility tractors.

That’s enough to keep mechanic Brett Anderson busy year-round. But the workhorses and newest machines in his fleet are two recently acquired Hitachi ZW80 wheel loaders, both of which see about 500 hours a year.

Stoney chose the Hitachis in large part because for years he had run the precursor to the Hitachi ZW80, the TCM loader. “Except for our old TCM, we’ve never had anything other than the Hitachis. They’re bullet proof,” Maddox says. Taylor-Cade operators run the loaders to clean up, build burn piles and move pallets. But the most critical application performed by the ZW80s is powering a tree spade to dig up the mature trees and load them onto trucks.

Once the containerized trees are planted in the ground and begin growing, crews work through the rows and carefully prune them several times a season to make sure the leaves or needles get a full measure of sunshine, and the trunks grow as straight as possible. As you might imagine with all the time and work that goes into them, these planted trees are Taylor-Cade’s most valuable commodities.

Live oaks are even more in demand this year. After winter ice and single-digit temperatures killed vast numbers of trees in Texas, the call for trees heading west has been unprecedented, Maddox says.

After three to five years in the ground, it’s time to harvest. And Maddox is not about to roll into his carefully manicured fields with anything less than a stable, dependable, low-impact machine.

The harvest starts with a tree spade attached to custom made boom on the bucket attachment plate of the ZW80 loaders. Auxiliary hydraulics open the spade as it is centered on the trunk. Once in position, three long triangular blades are driven down into the ground, cutting a conical shaped hole three feet deep around the root ball.

Cradled in the spade, the tree and root ball are lifted out of the ground. The hole is then lined with a poly sheet and wire mesh, and then the tree and root ball are placed back into the hole. Over the next few months, the roots grow through the wire and poly, which stabilize the root ball. Crews then return with the loader and spade, dig up the tree again and place the whole bundle — tree, root ball, with wire and poly intact — into a truck for transport.

With the weight of a tree spade and a five-year-old live-oak on the end of the boom, machine stability is an important factor for Maddox. Unlike most loaders which mount the rear wheels rigid to the frame, the Hitachis have an axle that pivots in the middle around the differential, same as a truck axle. That makes the machine more stable on sloped and uneven ground.

And while Taylor-Cade’s fields are flat and meticulously maintained, the risk of a tire slipping into a hole is not zero. A loader with wheels mounted to the frame in these circumstances might easily tip over, especially carrying a heavy load held high. With Hitachi’s oscillating axle, the loader is more stable on uneven ground.

“Except for our old TCM, we’ve never had anything other than the Hitachis. They’re bullet proof”

Maddox says the loader might get stuck in a hole, but it’s much less likely to tip over. “That’s a good safety feature they have on those machines that a lot of other loaders do not offer,” he says. And it’s no less important than when the load it’s carrying is the culmination of five years’ worth of work.

Some tree farms use spades mounted on skid steers or compact track loaders to extract their trees. But Maddox prefers the wheel loader. The visibility is better and CTLs and skid steers, no matter how carefully you operate them, tear up the ground. Maddox keeps a neat carpet of grass growing throughout his fields. The wheel loaders are heavy, but by virtue of their big tires and articulated steering, they won’t disturb the grass. And as long as there is grass in the rows, the mud and runoff created by rains is minimal. That’s no small thing in coastal Florida.

Something old, something new

Maddox bought his first Hitachi branded ZW80 when he found out that the company that made the TCM loaders was acquired by Hitachi. “I called the number that was on the old TCM machine and found out they no longer made them,” he says. But the same company that sold the TCMs, Great Southern Equipment, also sold Hitachis. Salesman Steve Tuton trailered one to the tree farm and worked out a deal.

“Steve and Great Southern Equipment have been good to work with. I’ve never even been to their dealership, but they send the filters and service items to our locations and take good care of us,” Maddox says. 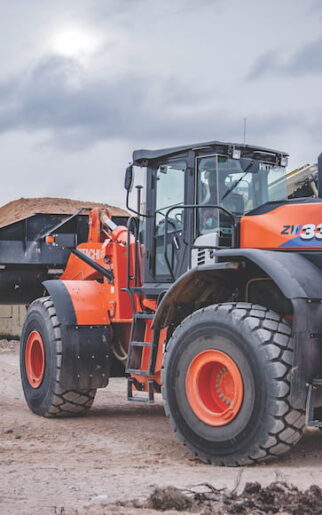 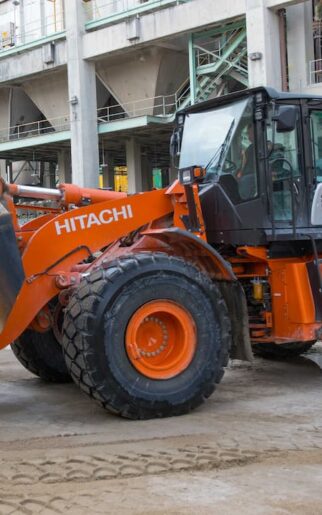 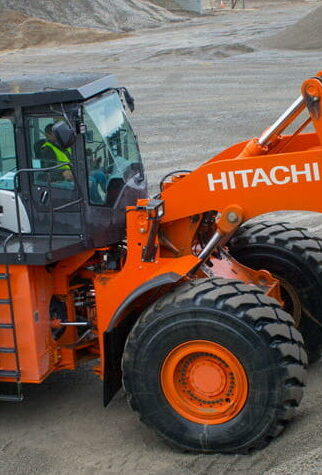 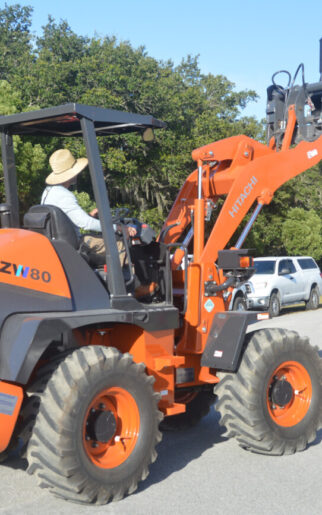