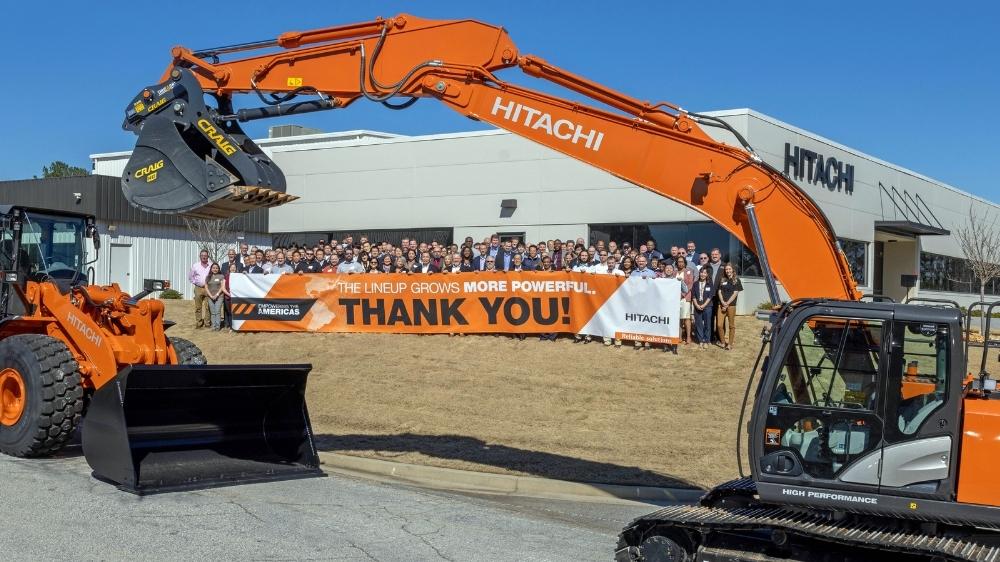 Bright blue skies, proud banners unfurled, commemorative artwork and confident handshakes among distinguished leaders from both sides of the Pacific served as the perfect backdrop for one of the biggest days in Hitachi Construction Machinery Americas Inc. (HCMA) history. The March 1 commemorative event at HCMA headquarters in Newnan, Georgia, was the culmination of years of planning and hard work. Hitachi-built excavators and mining equipment now complement the brand’s decades-proven selection of wheel loaders in the Americas.

Themed “Empowering the Future,” the event paid homage to Hitachi’s impressive history, while looking forward to a growth plan that empowers HCMA to aggressively expand its business across the Western Hemisphere. Following a path that has already seen HCMA’s market share more than double over the past five years, the company projects additional growth of close to 700% by the end of 2025.

“Hitachi has been the leading manufacturer of excavators for a long, long time. We have set a standard of excellence throughout the world that we are now bringing to the Americas.”

CEO Al Quinn addresses HCMA employees and distinguished guests and presents his vision for significant growth in the Americas.

Hitachi excavators and mining trucks have been sold through John Deere dealers for the past 30 years under a distribution agreement between HCM and Deere that was dissolved as of March 1. The separation created a unique opportunity for HCMA to sell and service those lines of equipment, along with the well-established Hitachi lineup of wheel loaders, through its own network of dealer partners. The change has positioned HCMA as an important player in the construction and mining equipment industries in the Americas and has opened significant opportunities for current HCMA dealers to expand their equipment offerings. It also allows newly established HCMA dealers to grow with one of the most proven and respected construction and mining equipment lineups in the world.

“In the 70 years that HCM has been developing, producing, selling and servicing construction and mining machinery, this expansion of our business in North America and Latin America is the biggest change,” said Ochiai, looking back at HCM’s history since its founding as a group by Hitachi in 1970. The first shovel had been manufactured using Japanese technology in 1949. “It has been the dream for many years for HCM to explore its own business in North America and Latin America, not only with wheel loaders, but also with other products, services and solutions. Expansion of business in the Americas will give further momentum, not only to development and production, but also to the promotion of sales, services and value chains. The Hitachi Construction Machinery Group will become a true global player.”

The first Hitachi-built hydraulic excavator was shipped from HCM Tsuchiura Works on November 10, 2021, and was on display at the commemorative event, along with a banner that offered thanks to HCM counterparts in Japan. HCMA’s product lineup now includes 26 excavator models engineered for compact, construction and mining industries; three haul truck models built for the mining industry; and 16 wheel loader models designed for compact and construction.

“I believe that mining and construction dealers in North and Latin America will want to consider partnering with Hitachi because of our established performance in markets around the world both in construction and mining,” said Quinn. “Hitachi has been the leading manufacturer of excavators for a long, long time. We have set a standard of excellence throughout the world that we are now bringing to the Americas.

HCMA, as a company, is fully invested in doing everything we need to do to be successful in North and Latin America, and our customers and dealers will feel that from us, and they will feel that from our parent company in Japan. We will do whatever it takes to be the best supplier you could deal with.”

A commitment that goes beyond equipment

That commitment doesn’t just stop with providing a great lineup of products. It also includes autonomy in decision-making that will allow leaders at HCMA to respond more quickly to the changing needs of dealers and customers in North and Latin American markets.

“The regional office structure that’s been established is really a unique approach that Hitachi has employed around the world,” said Simon Wilson, vice president of sales at HCMA. “By making a regional center and a regional management center, we have the ability to make decisions that are in the best interest of local customers.”

In preparation for the transition, HCMA has added more than 70 new team members throughout North America and Latin America, including product specialists from HCM.

Another significant part of HCMA’s growth plan includes building a world-class 336,017-square-foot parts distribution center in Jackson, Georgia. It’s only 30 miles southeast of the Atlanta airport, the busiest airport in in the Western Hemisphere. This proximity will allow HCMA to deliver parts across North and Latin America efficiently.

“The parts distribution center is a significant investment,” said Quinn. “Parts support is the lifeblood of what keeps equipment running, and customers really need access to great parts support to be able to minimize downtime and make money with their equipment. We’ve partnered with Hitachi Vantara, an advanced logistics company headquartered in Silicon Valley, to operate our parts facilities in Jackson, Georgia. Hitachi Vantara is the same company that looks after our centralized parts warehouse in Japan. This gives us unique synergies that allow us to streamline the parts distribution chain. We can offer innovative ways of delivering parts to customers directly from Japan or from Atlanta, whichever is quicker. We think our dealers and customers will consider this a significant advantage.”

Closing remarks from Quinn at the event set the stage for continued growth — recognizing the vision that helped make the historic day a reality.

“Today is March 1, 2022. This is a really amazing day. We have top management from Japan together with all our employees here in Newnan, Georgia. We reflected on the past, our history and all the changes we’ve been implementing over the last five years to get ready for this day. We had Mr. Ochiai from Japan, one of the primary architects of making this change happen, visiting with us today and sharing his experiences of how this plan all unfolded and came to be. You cannot believe how excited our employees are, being a part of taking Hitachi to the next step in the Americas. We’re going to do a great job for all our dealers and customers. We are truly excited. This is a special day. This is a historic day.”

For the event, HCMA commissioned artist Gary Wing to create a commemorative painting. Titled “Empowering the Americas” (pictured right), the painting signifies the addition of excavators and mining equipment to HCMA’s existing wheel loader lineup. The original painting is on display at HCMA headquarters in Newnan, Georgia. Limited edition, signed prints were provided as gifts to VIP guests at the event and sent to select HCMA dealer locations. Wing previously painted a piece titled “Coming to America” to celebrate the grand opening of HCMA’s headquarters in 2018 (pictured left). HCMA employees signed the original painting in honor of Masaaki Hirose, former HCMA chairman, prior to his return to Japan.

Read this edition of FOCUS magazine to explore how HCMA’s team is “Empowering the Future” during a time of growth and expansion for the company, introducing new technology and more! 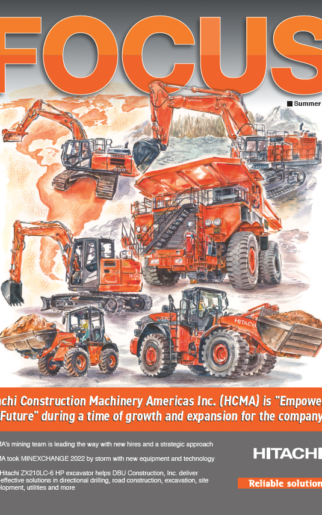 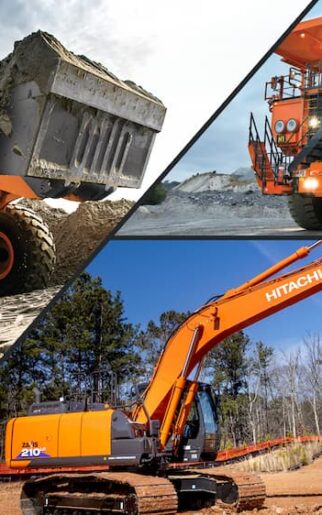 Sonosuke Ishii steps into the role of chairman of Hitachi Construction Machinery Americas Inc. (HCMA), where he will pursue continued… 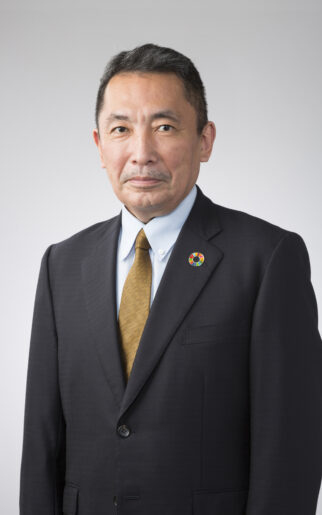 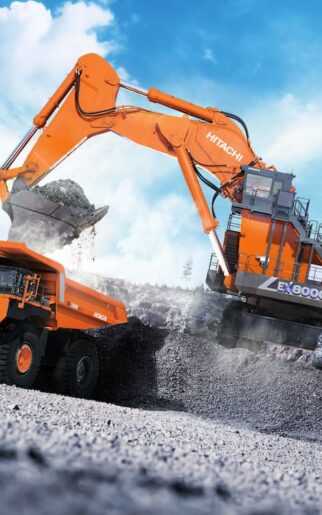